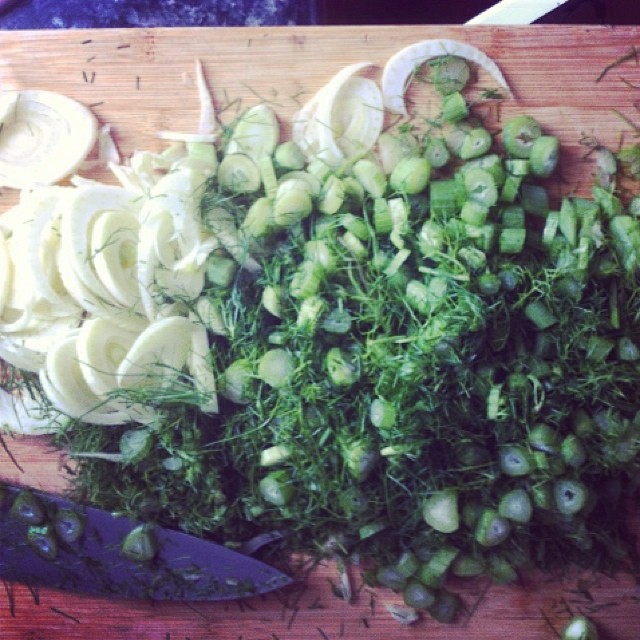 There’s a vaguely oriental feel to this, which you can either embrace
with the addition of sesame oil and soy sauce, or steer more toward
the Mediterranean with the use of olive oil instead. You know it breaks
my “no-fruit-in-salad” policy, but this is using the grapefruit for its acidity
– as part of the dressing – which is entirely acceptable.

You will need:
a daikon (long white radish)
one bunch of rainbow chard
a fennel
ruby grapefruit
sesame seeds (white, black, or both)
olive (sesame or olive)
dark soy sauce or salt

1) Toast the sesame seeds very lightly in a dry pan. turn it off before they’re
done, as they’ll keep cooking for a while.

2) Wash and then very thinly slice the rainbow chard, and place in a very
large bowl.

3) Chop an inch off the top and bottom of the grapefruit, then place flat,
and chop off the rest of the peel. I find it preferable to waste a little flesh
rather than have to eat the pith, but that’s up to you.

4) Using your eyeballs, look carefully at where the segments of the
grapefruit begin and end. Make an incision down each side of
the segment, so that you remove the segment as a whole.
Add these segments to the bowl, then grab the disfigured
core of the grapefruit and squeeze the rest of the juice over
the fruit and chard.

5) Scrub and grate the daikon, discarding the top.

6) Chop the very bottom off the fennel, then slice the whole thing –
stems, leaves, and all – and add to the salad. If you waste the leaves,
I will find out.

7) Season with the soy or salt, then dress with oil. If this sits for a few minutes,
the chard will tenderise a little more as the citric acid does its work. Chuck the
seeds on top, and it’s done.

This week, among other things:
the last of the “Late Lane” navel oranges (an Australian variation on
the Washington navel. Next week: Valencias)
some quite large pink lady apples
little hass avocados: a few days from ripe
Cavendish bananas (I suspect last week’s batch hadn’t received
their dose of natural ethylene, which is probably just as well,
given the heat)
more picturesque zucchini, and a little squash just for variety’s sake